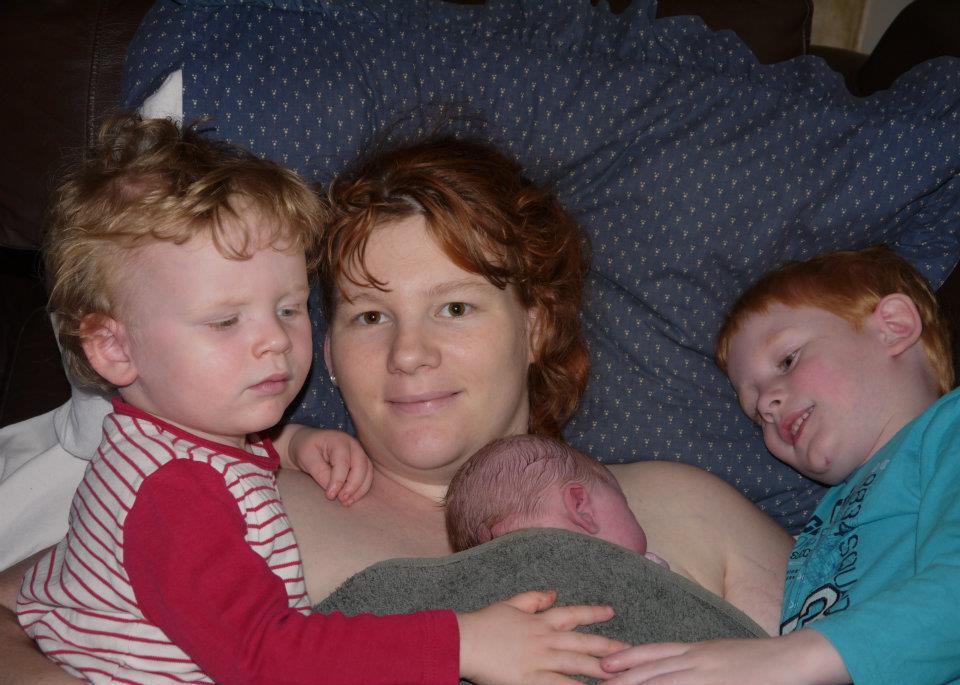 When I fell pregnant with my first son, James, I assumed all I’d need to know about pregnancy and birth I’d be told by my (NHS) midwives, including the best way to give birth. I wanted to have a natural birth, drug free that was the best for my baby and just hoped I’d be able to “cope”. The reality was an induced delivery due to being ‘overdue’ resulting in a spiral of intervention including an epidural, a forceps delivery, a large haemorrhage and a pressure sore due to lack of care after the epidural that took several weeks to heal after the birth. My son was born at 42 weeks + 2 days and I walked away completely distrustful of the hospital and feeling I’d “failed” my son in his first ever experience of the world. Most of all I felt that there must be a better way to give birth.

When I fell pregnant with my second son, William, I knew I didn’t want to repeat my first experience and had heard of Hypnobirthing from one of the other mothers I met through baby groups with James so I took the course and absolutely loved all areas of it. I spent months visualising what I wanted for the birth of my baby, I didn’t want to go anywhere near the hospital, unless there was something indicating a problem with me or baby, and I didn’t want to be induced. I chose to have a home birth and borrowed a birth pool and had almost exactly the labour I wanted. William arrived at 6:20am after a 2 and a half hour labour. The hypnobirthing practice paid off tremendously. The birth was so calm and peaceful that I said to the midwife who was sitting on the couch writing notes that the baby was coming and when she didn’t really react I then re-phrased it and said “the head’s out!”. That got her off the couch like someone had just stuck her with a hat pin.

Much as I loved my home hypnobirth with William, my previous induction had meant that throughout the pregnancy I’d had to again and again state my intention to homebirth and that I understood the risks. There were also little things that didn’t quite go as I wanted such as the midwives clearly had little or no experience of a hypnobirthing, and were very nervous about the possibility of haemorrhage so wanted me to have a managed third stage which I agreed to in the end because I couldn’t be bothered arguing with them any further.

So, when I fell pregnant with our third child what I wanted was to be able to see one midwife, get to know her, explain my history and that I wanted to have a home hypnobirth again and that this time I wanted to be given the chance to have a physiological third stage (though if nothing was happening I was open to having a managed one). Most importantly though, I wanted to be able to have a relationship with my midwife that I could trust. I wanted to be reasonably confident that when I went into labour, the only reason my midwife would recommend a course of action such as transferring to hospital wasn’t because they didn’t have enough staff or because I was over a certain weight that statistically “something bad” was “more likely” to happen.  Because of this, I decided on an independent midwife for my care, and that’s where Liz came in.

I had a fairly typical pregnancy (for me) and I really loved the little things about having Liz look after me like she came to me for our appointments and it didn’t matter if the boys (or anyone else) were around. I was able to contact her in between appointments with the questions and concerns I had in between our appointments. I really enjoyed the chance to interact with Liz personally as well as having someone I could trust professionally too.

When I went into labour things didn’t quite happen as I expected them to. I had had niggling tightenings the previous day and had texted Liz about them but said not to worry about them yet. They wore off by the end of that night and in the morning I woke up and before getting up text Liz to say nothing had come of them. I then got up and found blood on my sheets and straight away rang Liz to let her know.  As it turned out, Liz had been called out to a birth that night, but she told me to just rest and take it easy and keep her updated. I spent a rather dull day on the couch and eventually the tightening did come back, but they still weren’t anything I was worried about. Eventually I texted Liz and said if she got the chance, could she come and see me just to check everything was alright. I would rather be checked and have things fine than not be checked and just worry about it. As Liz was still with her other client by the afternoon, she arranged for her lovely colleague Meg to come out and check me over. Meg arrived about 3:30pm, listened in, and said everything was fine. She thought something might happen that night after we’d put the boys to bed but so far all was ok.

At about 4:30 I decided to go up and have a bath, knowing that it was coming up to the dinner and bed-time for the boys and that having a bath early on in labour often tends to slow things down and as I wanted to get the boys out the way I thought that might be a good idea. Of course, it  had the opposite effect as soon as I relaxed the surges started coming on fairly strongly and at 5pm I got out of the bath came downstairs and told Tony to ring Liz, inflate and fill the birth pool. The good news was, Mum was already at my house to help look after the boys and Liz had finished at the other lady’s birth. The slightly concerning news was she had to re-stock her car before coming to me and I knew it was a 45 min trip for her and we were entering rush hour… I chose not to worry about that though because we’d been aware that I tended to labour quickly so Liz had had a chance to run through with Tony (my husband) what he would need to do if Liz didn’t make it on time and I figured we’d cross any bridges we needed to when we got to them.

At about 6:15pm Liz arrived, by that time we’d inflated and filled the birth pool and I was busy breathing through my surges which were coming pretty thick and fast by that point. The boys were both around and running in and out of the room, William (2) was just saying “Mama, doing?” which is his way of asking what I was doing and James (4 and a half) kept running up to me asking “Is the baby out yet?”. I had my hypnobirthing music on, which was helping me to focus through this and I also found that being in the pool was kind of my way of isolating myself from the rest of the room too, I only found the boys disturbing if they leant on the sides of the pool. When Liz arrived I told her that I was getting close to feeling the need to push and sure enough, not long after she arrived I reached transition. I distinctly recall telling Liz I’d reached the point where I didn’t want to do it anymore. I was waiting for that point because I knew once I reached that feeling that the baby would be born soon after. With the next surge that came, the baby started to come down. I had torn in 3 places with William so this time round I wanted to be more careful, so as soon as the head started to come, Liz was right there telling me to go slowly and gently. I thought I’d birthed most/all of the head in the first surge but when I asked, only the top part of the head was there and it stayed that way till the next surge where most of the face, up to the mouth came out. At that point Meg arrived back, I know this only from what I was told afterwards. I had no knowledge of her coming in. I then did one last push and delivered the rest of the head and the body in one go, Liz then passed my baby through to me and I brought baby up out of the water. She was born at 6:45, 1hr 45 minutes after labour started (properly) and half an hour after Liz arrived.

The first thing I did was check if we had a girl or boy and for a brief moment thought something was missing, then realised we had a little girl. We named her Olivia. I got out of the pool to deliver the placenta and Liz and Meg bundled us both onto the couch for some skin to skin time. The placenta came really easily and quickly, and I then settled down to snuggle with our new baby. The boys both came to see her too and we’ve got a lovely picture that was taken less than an hour after Olivia was born with Olivia having skin to skin with me with a brother cuddling on each side of her. Tony cut the cord after it had stopped pulsing and the placenta had been delivered and I only had a little tear, not even worth stitching. The boys stayed up for a couple of hours more and then eventually we managed to get them settled and off to bed and we went to sleep too. Before Liz left for the night, I made sure Olivia had had a feed and I’m pleased to say she took to breast-feeding really well.

In the days that followed, Liz was with us regularly, taking care of us and making sure we were both well. For the first time, I got to talk to the midwife who was present at the birth of my child and get her perspective of the birth and hear the bits that I hadn’t realised were happening around me. It was amazing and lovely to have the chance to talk about it like that. The day after Olivia was born, Liz made me a placenta/fruit smoothie. I had heard of it being done and that it was beneficial but I hadn’t really thought about it in any way, when Liz offered I thought, “Why not, if I don’t like it I don’t have to drink it, but it may well do me good”. I did like it. It was just a fruit smoothie and I assume it did me some good.

Olivia’s birth was exactly what I wanted for the birth of my child and I feel so grateful to have been able to share it with someone like Liz whom I’d gotten to know throughout my pregnancy.  It was also lovely to be able to have the boys around and give them the perspective of birth being a perfectly normal natural thing. Should Tony and I decide to have a 4th child, I wouldn’t hesitate to ask Liz to care for us again. She is part of the family now.